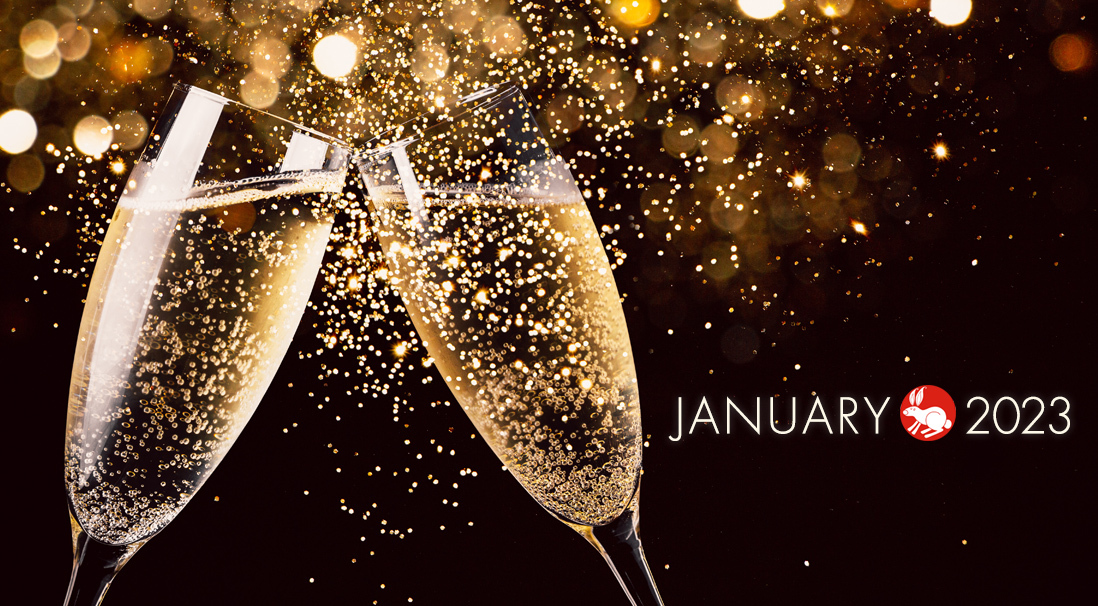 For thousands of years, the I Ching has provided guidance for decisions about our health, relationships, financial matters, work, and play. Predictions from the I Ching follow the lunar year and are based on multiple overlapping cycles that govern the heavens and earth. A variety of stems, branches, directions, and phases also have their say, each creating a trail of portents, probabilities, and possibilities, so let us begin …

The Earth Element is associated with the change of seasons; its main function is to support and draw the elements together. In a double-Earth month such as January, its energy acts as a pivot to create harmony and balance between the seasons. As winter fades into spring, Earth will ease the way.

In the calendar, January is the twelfth and final month of the Chinese lunar year. It is in a phase called Chui (丑), a time of soft Earth energy that nourishes unseen growth. Think of a seed waiting quietly in the soil, absorbing nourishment to create the sprout that will emerge in the spring. This month, we too, are incubating concepts, inspiration, and perceptions that will become evident to us later, when the time is ripe.

Children born in 2023 are arriving in the Chinese year of the Rabbit. Sensitivity is one of the characteristics associated with this sign, which is why Rabbit babies are prone to crying. Perhaps more than babies born under any other sign, children born in a Rabbit year need routine and a stable environment to thrive; at school, they will develop a flare for artistic subjects, and many of them will excel in music.

This year, the Chinese New Year will begin on January 22, on the new moon following the winter solstice. Many people have already begun to travel home to celebrate this important holiday with their families. New Year festivities will come to a close on Sunday, February 5, along with the celebration of Yuao Xiao, the Chinese Lantern Festival.

In China, preparations for the new lunar year include a thorough housecleaning, representing a farewell to the past and a hearty welcome to a year of the Rabbit. We too, can look forward to the inspiration provided by January’s soft yin Earth energy, and we encourage you to sneak a peek at what’s in store for your element in this final month of the lunar year.

Earth Element energy deserves a rest after the workout you gave it over the holidays, so now it’s time to step back and start minding your digestive p’s and q’s. Set aside quiet time for planning healthy meals. If being overweight is your issue, remember that many of us eat too much and that there’s no harm in allowing our stomachs to feel a little hungry.

Most Earth people have high moral principles and devote time to trying to figure out the right thing to do, but that can lead to one of your biggest problems which is procrastination, which can make you anxious and affect your mental well-being. Remember that inspiration is most likely to strike once you’ve begun a task that you’ve been trying to put off.

You are a fixer; have you noticed that it is far more interesting to try and fix someone else’s problems than it is to fix our own? The interesting thing is that until someone is willing to change and is motivated to implement the changes by themselves, there’s not much you can do to help. Until that happens, focus inward and do what you can to help yourself.

Money is a kind of energy that allows us to sustain ourselves materially; it gives us the freedom to live our lives in a constructive, meaningful way, and when we have money, it also means that we can use it to sustain our own selves as well as help others who are in need. Double earth energy can be a powerful force for good, so use it wisely.

Things can get messy in a brand new year, so tackle and clean up problems now and you will be able to relax and enjoy leisure time later. With procrastination as your worst enemy, the more try to avoid pain in the short term, the more likely you are going to procrastinate again in the future. You inspire others, so dig in and get things done.